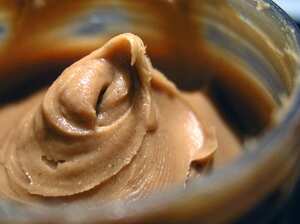 Peanut butter in a jar

Peanut butter (also known as peanut paste) is a food paste made primarily from ground roasted peanuts, with or without added oil. It is popular throughout the world.

The peanuts are ground twice. First they are ground into small pieces. A second grinding stage, which may combine the peanut butter with salt, sweetener, and often a stabiliser to keep the oil from separating, grinds them finely. The oils will separate after a time; unstabilised varieties in particular are best refrigerated to prevent the oil from separating out, but which makes the butter harder to spread. "Natural" peanut butters have been introduced which use palm oil as a stabiliser so as not to require stirring. Crunchy peanut butter has small pieces of whole peanuts mixed in.

In the United States, a product described as peanut butter must contain a minimum of 90% peanuts.

How much does one cup of peanut butter weigh?