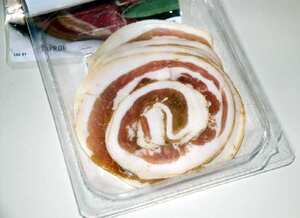 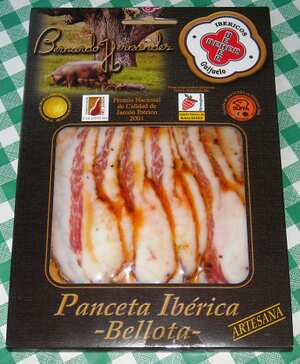 Italian pancetta or Spanish panceta is a kind of dry cured meat. It is pork belly that has been salt cured, salted and spiced (nutmeg, pepper, fennel, dried ground hot peppers and garlic are often featured), and dried for about three months (but usually not smoked). There are many varieties, and in Italy each region produces its own type. In Corsica it is considered a regional flavour.

Pancetta can be rolled (see photograph), or straight (with all the fat on one side). The straight variety is more common in Italy and Spain than elsewhere, especially where homemade pancetta is still produced.

When served on its own, the rolled pancetta is presented in very thin slices. More often it is used to flavour other dishes, especially pasta sauces. Recipes such as all’amatriciana often contain pancetta as a substitute for guanciale, which is much more difficult to find outside of Italy.

In the United Kingdom, Pancetta is more commonly sold as packs of cubed belly (lardons), (rather than rolled).

In Spain, medium to long and relatively thick portions are also served as a side dish, usually fried in olive oil or its own fat. Fried eggs with chorizo and panceta is considered a popular hearty breakfast in some rural parts of the country.

Panceta ibérica de bellota made from black foot pigs fed on acorns in western Spain and is flavoured with smoked paprika during the curing process. It is available from Delicioso and other suppliers of Spanish ingredients