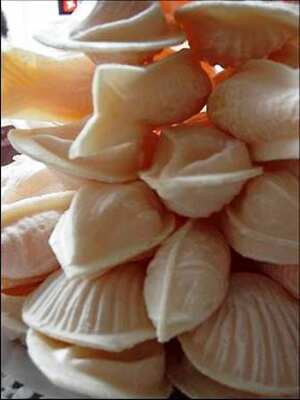 Ovos Moles de Aveiro is a Portuguese IGP product obtained by the addition of raw egg yolk to sugar syrup. They may be put up as they are, wrapped in communion wafer or put up in wooden or China containers. Its colour is uniform, ranging from yellow to orange, shiny all over and very intense, its complex aroma is of egg yolk developing towards a characteristic odour contributed to by aromas as varied as caramel, cinnamon and nuts, as a result of the chemical reactions during cooking between the sugar and the components of the egg yolk. It is sweet, with the flavour of egg yolk and sugar softened by the cooking process and its consistency is creamy and somewhat thick. The texture is uniform, with no yolk or sugar grains (although they are permissible several days after manufacture, inasmuch as they are the result of crystallisation of the product). The communion wafer occasionally used in the commercial presentation is of even colour ranging from white to cream, opaque, matt and odourless or with a slight odour of flour. The flavour is sui generis, its consistency plastic and crumbly and its texture dry, smooth and uniform.

In view of the specific requirements concerning the egg yolks, in particular as regards colour and degree of freshness, the geographical production area for the eggs is limited to the districts bordering on the Ria de Aveiro and neighbouring lagoon areas and the districts in the Médio Vouga. From an administrative point of view, the area covers the districts of Águeda, Albergaria-a-Velha, Aveiro, Estarreja, Ílhavo, Mira, Murtosa, Oliveira de Frades, Ovar, S. Pedro do Sul, Sever do Vouga, Tondela, Vagos and Vouzela.

In view of the edapho-climatic conditions and characteristics required for preparation of the communion wafers and the ‘ovos moles’, in particular as regards humidity and atmospheric temperature and the requisite specific know-how, the geographical area for the preparation and packaging is limited to the districts bordering on the Ria de Aveiro and neighbouring lagoon areas. From an administrative point of view, the area covers the districts of Águeda, Albergaria-a-Velha, Aveiro, Estarreja, Ílhavo, Mira, Murtosa, Ovar, Sever do Vouga and Vagos.

According to authentic and unvarying local custom, the eggs are carefully cracked open and the yolk separated either by filtering through the fingers or by using an appropriate egg separator. At the same time, the sugar syrup is separately prepared; it must be heated to a point midway between thickening and forming threads. The yolks are added to the syrup once it has cooled down. The mixture is cooked at a temperature of 110 °C and the know-how associated with this stage is crucial. Next, the mixture is allowed to cool and rest for 24 hours either in ovens or appropriate locations within the confectioners' premises. The reason for this is that, at this stage, the Ovos Moles de Aveiro mixture is quite sensitive to sharp changes in temperature and can all too easily adsorb extraneous aromas. After this stage, depending on the way in which the product is finally to be presented, the cooled mixture may be used:

In view of the characteristics of the product, in order to avoid any contamination and prevent changes to the filling or the wafer, Ovos Moles de Aveiro are marketed packed at source in containers, of a type approved by the Group, which are in the authorised format, materials and motifs or packaged in cardboard or in a controlled atmosphere. Ovos Moles de Aveiro may be put up for sale in bulk, with or without wafer, only in confectioners' premises and always with documentation certifying its origin, lot number and date of manufacture. Ovos Moles de Aveiro must be transported, kept and displayed at between 8 and 25 °C, which gives it a normal shelf life of 15 days.

Ovos Moles de Aveiro have been manufactured for centuries. The tradition of manufacturing the product, which originated in convents, was maintained by ladies who had been educated in convents and who passed the secret of its manufacture from generation to generation. There are documents showing that, in 1502, King Manuel I granted 10 ‘arrobas’ of Madeira sugar per year to the Convent of Jesus in Aveiro for the manufacture of confectionery products in the convent, which at the time was used to help patients during their convalescence. Ovos Moles de Aveiro are referred to in 1908 as a dessert dish for royalty, are expressly mentioned in 1888 by the greater Portuguese writer Eça de Queiroz in ‘Os Maias’ and ‘A Capital’ and by the great Brazilian author Erico Veríssimo, who mentions the product in ‘Solo de Clarineta-Memórias’, in 1973. The distinctive barrels in which the Ovos Moles de Aveiro are presented, the shapes of the wafers, which are almost always on maritime themes, and the typical sellers often feature in tiled panels, prints, popular poetry, plays and the regional songbook. As early as 1856 there existed a register of reputable manufacturers.

The phytoclimatic aspects of the region are dominated by the basin of the River Vouga, which flows into the Ria de Aveiro, which is another significant geographical feature. This gives rise to specific conditions for agriculture, in particular those relating to the growing of maize and the raising of poultry which has developed with particular vigour along the banks of the ria. The area of the Baixo Vouga has always been marshy and the Médio Vouga a fertile region for the production of good-quality maize in large quantity. Although centuries ago this form of farming was at subsistence level, by the end of the 19th and the beginning of the 20th Century it had gained an entrepreneurial dimension with the establishment in the districts bordering on the River Vouga of undertakings with a large production capacity and a reputation for quality.

The traditional maize used in chicken feed no doubt has contributed to the quality which distinguishes the product resulting from it. The temperature and the humidity of the ria are also propitious to the manufacture of Ovos Moles de Aveiro and the wafer, giving it the appropriate and long-lasting plasticity which is impossible to reproduce outside the region.

Both the use of the barrels made of wood or china and the moulds used in the manufacture of the wafer attest to an unmistakable link with the Ria de Aveiro and its lagoon motifs, in particular by means of the use of the lighthouse on the ria or of typical ‘moliceiro’ river craft as trade marks or by making the wafers in the shape of fish, shellfish and barrels and buoys to mark fishing nets, another of the activities which is typical of the region. It is worth noting that barrels made locally of poplar wood and of china are made of traditional regional materials.