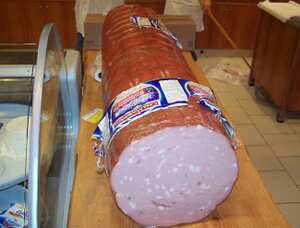 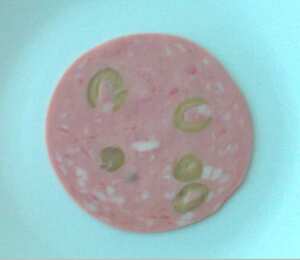 'Mortadella is an Italian sausage made of finely minced heat-cured pork sausage which incorporates at least 15% small cubes of pork fat (principally the hard fat from the neck of the pig). It is delicately flavoured with spices, including whole or ground black pepper, myrtle berries, nutmeg, coriander and pistachios.

Traditionally the pork filling was ground to a paste using a large mortar and pestle. Mortadella gets its name from a Roman sausage flavoured with myrtle in place of pepper.

Mortadella originated in Bologna, the capital of Emilia-Romagna; elsewhere in Italy it may be made either in the Bolognese manner or in a distinctively local style. The mortadella of Prato is a Tuscan speciality flavoured with pounded garlic. The mortadella of Amatrice, high in the Apennines of northern Lazio, is unusual in being lightly smoked. Because it originated in Bologna, this contributed to the naming of the American meat bologna.

A similar commercial product that omits the cubes of pork fat, called bologna, is popular in the United States. It is also known as polony in the United Kingdom.

It is very popular in Spain and Portugal, where a variety with pepper and olives is widely consumed, especially in sandwiches. Sometimes, in Spain, the standard mortadella is referred to as Mortadela italiana ("Italian mortadella"), because there's a local variant named Catalana or "Catalan mortadella". In Hungary they have a similar product called in Hungarian Mortadella and a plain variety called Pariser, Parizer or Párizsi.

In Lebanon, it is known by the same name, Mortadella, and is available in pork, beef, chicken and turkey, both imported from Italy and locally made. A variety with pepper and olives is also very popular.

In several Arab and Muslim countries, like the UAE, Qatar and Egypt, Halal mortadella is sold, which is made from chicken, beef, or turkey.

It's also popular in Iran, albeit usually made with beef or lamb, and called martadella or, more commonly, cawlbawss