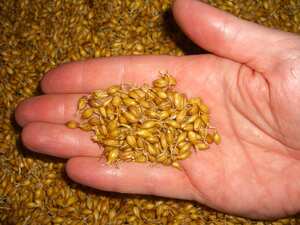 Malt is germinated cereal grains that have been dried in a process known as "malting". The grains are made to germinate by soaking in water, and are then halted from germinating further by drying with hot air.

Malted grain is used to make beer, whisky, malted shakes, malt vinegar, confections such as Maltesers and Whoppers, flavoured drinks such as Horlicks, Ovaltine and Milo, and some baked goods, such as malt loaf, bagels and rich tea biscuits. Malted grain that has been ground into a coarse meal is known as "sweet meal". Various cereals are malted, though barley is the most common. A high-protein form of malted barley is often a label-listed ingredient in blended flours typically used in the manufacture of yeast breads and other baked goods.

Malt extract is also known as extract of malt. It is a sweet, treacly substance used as a dietary supplement. It was popular in the first half of the twentieth century as a supplement for the children of the British urban working-class, whose diet was often deficient in vitamins and minerals. Children were given cod liver oil for the same reason but it proved so unpalatable that it was combined with extract of malt to produce "Malt and Cod-Liver Oil." Malt extract was given as a "strengthening medicine" by Kanga to Roo in The House at Pooh Corner, and was also Tigger's favourite food in the book.