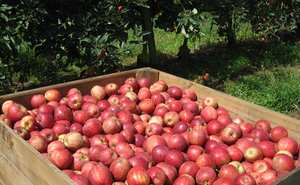 Evidence: Established through use, particularly due to written references- "1750 - João Baptista de Castro -... the fame of the apples in the orchards of Alcobaça was increasing ... the high esteem in which the pippins of Alcobaça are held".

Method of production: The many varieties are intensively cultivated, from the Atlantic Ocean in the west to the Serra dos Candeeiros in the east. The orchards are 50 to 100 m above sea level in a hilly landscape. The apples are picked between the second half of August and the end of October, depending on the variety.

Link: This area possesses the best soils for apple-trees, the profile is different not only in terms of the nature of the ground rock but also in terms of the slope, the intensity of erosion phenomena and the external drainage, which are, in turn, dependent on the characteristics of the relief.

Gastronomy: IGP Maçã de Alcobaça apples are stored at a temperature, humidity and length of time depending on their variety. However the temperature should not exceed 5°C for a period of no longer than six to eight months. They are eaten fresh or used as ingredients for desserts and fruit juices.