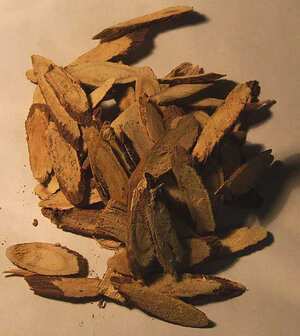 Liquorice flavour is found in a wide variety of liquorice candies. The most popular in the United Kingdom are liquorice allsorts. In continental Europe, however, far stronger, saltier candies are preferred. It should be noted, though, that in most of these candies the taste is reinforced by aniseed oil, and the actual content of liquorice is quite low. However, in the Netherlands, where liquorice candy ("drop") is one of the most popular forms of candy, only a few of the many forms that are sold contain aniseed (although mixing it with mint, menthol or with laurel is popular, and mixing it with ammonium chloride creates the very popular salty liquorice.)

Pontefract in Yorkshire was the first place where liquorice mixed with sugar began to be used as a sweet in the same way it is in the modern day.

Liquorice flavouring is also used in soft drinks (such as root beer), and is in some herbal teas where it provides a sweet aftertaste. The flavour is common in medicines to disguise unpleasant flavours. Dutch youth often make their own "dropwater" (liquorice water) by putting a few pieces of laurel liquorice and a piece of liquorice root in a bottle with water and then shake it to a frothy liquid. Also popular in the Netherlands is a liquorice based liqueur called "dropshot."

Liquorice is popular in Italy (particularly in the South) and Spain in its natural form. The root of the plant is simply dug up, washed and chewed as mouth-freshener. Throughout Italy unsweetened liquorice is consumed in the form of small black pieces made only from 100% pure liquorice extract; the taste is bitter and intense, also popular in the UK too 'L. Imps'. In Calabria a popular liqueur is made from pure liquorice extract. Liquorice is also very popular in Syria where it is sold as a drink. Dried liquorice root can be chewed as a sweet. According to the US Department of Agriculture Food Database, black liquorice contains approximately 100 calories per ounce (28g).

Chinese cuisine uses liquorice as a culinary spice for savoury foods. It is often employed to flavour broths and foods simmered in soy sauce.

Other herbs and spices of similar flavour include anise, star anise, tarragon, and fennel.