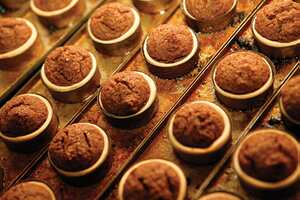 IGP/BGA Liers vlaaike is a small, round cake from Belgium, which is approx. 3 cm deep, has a diameter of 5 to 6 cm and weighs approx. 45 g. The cake consists of a base and a filling. The base is thin, 3 to 4 millimetres thick, with a fairly high raised edge and is made of unsweetened whitish baked short pastry. This base is filled with a sweet, spiced, dark purée. It is filled neatly to the brim and during baking the filling bulges up slightly, its texture remains creamy and it turns a very dark brown colour. The spices and candy syrup are the dominant flavours.

The geographical area comprises the town of Lier, including the municipality of Koningshooikt, in the Province of Antwerp.

Specificity of the geographical area

Vlaaien, in all their various forms, are part of the sweet food heritage of Flanders. They are in most cases simple pastries made by housewives and bakers alike. They have also been immortalised by old Flemish masters such as Breughel. A number of recipes have stood the test of time to become genuine regional specialities. Bakers in Lier have maintained the tradition of ‘Liers vlaaike’. The recipe and expertise are so closely tied to the town that the cake has never been baked outside Lier, although bakers from Lier have sold them outside the town, on markets in Antwerp, for example.

It is no coincidence that the origins of ‘Liers vlaaike’ are to be found so close to the port city of Antwerp. Its typical taste is dominated by the blend of four spices and candy syrup. Antwerp was one of the main European ports through which oriental spices and sugar cane were imported. The sugar cane was processed on site into sugar candy and brown sugar.

A number of old, small, wooden cake moulds have been preserved in Lier. Before the Second World War these wooden moulds were used to shape the base of the cakes. This involved making a dough with warm water, lining the moulds with the dough and leaving it to dry for several days. Only then were the bases removed from the moulds and baked with the filling.

‘Liers vlaaike’ has a unique, traditional recipe which has been preserved by the town’s bakers. It differs from other Flemish flans for the following reasons:

— its shape: they are small, individual cakes

— its base: consisting of a dry, unsweetened dough

— its filling: based on breadcrumbs, candy syrup and spices.

‘Liers vlaaike’ does not contain any eggs, salt, preservatives or flavour enhancers. Most of the bakers prepare their own breadcrumbs, consisting of the remains of dried, grated bread rolls, buns, soft rolls or baguettes. This combination of a small cake with an unsweetened crust and a very sweet and spicy filling produces a unique local product that is only made by Lier bakers. Thus the renown of ‘Liers vlaaike’ relates solely to these cakes. There are no variants.

Causal link between the geographical area and a specific quality, the reputation or other characteristic of the product The protected geographical indication ‘Liers vlaaike’ is based on the renown of the product, which has been made in the town of Lier for more than 300 years. Tradition has it that the origins of ‘Liers vlaaike’ date back to 1722. Lodewijk Jozef van Kessel, Canon of Saint Bavo Cathedral in Ghent, refers to the recipe in his ‘Memorieboekje’ (‘Book of Memories’). ‘Take an uper of sweet milk, three rusks, three crushed cloves. Bring them to the boil and add syrup to sweeten. Place this mixture in a cake crust and bake’. The recipe for the filling has hardly changed: the rusks have been replaced by breadcrumbs and a blend of spices is now used instead of just cloves. In 1890, at an exhibition of Lier trade and industry during the Saint Gummarus festivities, His Majesty King Leopold II and Her Majesty Queen Maria Hendrika were unexpectedly offered some ‘Liers vlaaikes’ on a silver plate by the baker Mr Van den Eynde. Her Majesty the Queen took one and ate it with relish. She turned to Mr Van den Eynde, said it was very tasty and asked him how he made such cakes. Not wanting bystanders to hear the recipe for his speciality, the baker is said to have answered: ‘Your Majesty, I beg your pardon, but that is a trade secret!’ The Queen answered with a smile: ‘Oh yes, of course, I mustn’t make competition for you …’. A few weeks later there was a royal coat of arms above Van den Eynde’s bakery in Antwerp Street bearing the inscription ‘Purveyor to the Royal Household’.

Felix Timmermans, the famous Flemish author, incorporated ‘Liers vlaaike’ into ‘Schoon Lier’ (1925), his eulogy to the town. ‘Liers vlaaike’ has been included in numerous old and more recent publications relating to local products. To give a few examples, the book ‘De Zoete Provincie; Ambachtelijke specialiteiten uit Antwerpen’ (1998 and 2007) counts ‘Liers vlaaike’ among the oldest of local pastries, as does Wat folklore in betrekking met de Pasteibakkerij by A. Vanaise (1932): 'This is what “Liersche Vlaaikens' are like — they are round cakes baked in moulds and made of a mixture of breadcrumbs, syrup and milk’.

Tourist guides such as ‘Zwerven door Vlaanderen’ by Jan Lambin (1961), ‘Ippa’s Streekgerechtengids voor België’ (1995), ‘Lekker Antwerpen’ (1993) and ‘Kleine culinaire encyclopedie’ (2009) also refer to ‘Liers vlaaike’. ‘Liers vlaaike’ has also become internationally known on the internet. 72 % of respondents to a quantitative market survey of the inhabitants of the province of Antwerp conducted by VLAM (Vlaams Centrum voor Agro- en Visserij Marketing vzw, Flanders' Agricultural Board) considered ‘Liers vlaaike’ to be a traditional local product (2003). In 1995 ‘Liers vlaaike’ was included on the Flemish Euroterroir list and in 2007 it was recognised as a traditional local Flemish product.

‘Liers vlaaike’ is baked all year round and the people of the town like to take them as presents for outsiders. It plays a part in festivities large and small held in the town and at the town hall. On a visit to Lier in 2000, the Belgian royal couple Prince Philip and Princess Mathilde had the opportunity to taste ‘Liers vlaaike’. During local festivities, such as the celebrations for all 75-year-old residents of Lier, the town offers all those invited coffee and a ‘Liers vlaaike’, and various local restaurants invariably serve a ‘Liers vlaaike’ as a little dessert to accompany coffee.