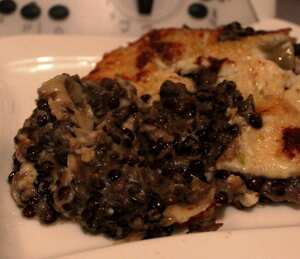 The timing for cooking the lentils is approximate and you may find that you will need a little less stock or a shorter cooking time. Puy lentils are cooked in 20-25 minutes if boiled, so try not to overcook them, especially as they have had a short soaking beforehand. Just don't let the mixture get too dry and bear in mind that the liquid will continue to evaporate whilst making the béchamel sauce.