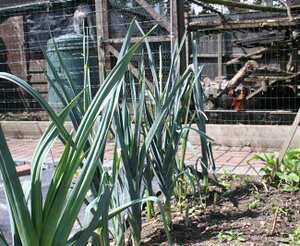 Leeks running to seed - with chickens looking on

The edible portions of the Leek are the white onion base and light green stalk. The onion like layers form around a core. The tender core may be eaten, but as the leek ages the core becomes woody. Leeks are an essential ingredient of cock-a-leekie and vichyssoise. They can also be used raw in salads, doing especially well when they are the prime ingredient.

Spring onions or even normal onions, including the green leaves could be used if leeks are not available, though the flavour will be much stronger than with leeks.

If leeks are to be added to a dryish dish, par boil them for 4 minutes first, otherwise they are likely to be too dry.

How much does one cup of leeks weigh?

Leeks are at their best and in season during the following months: September, October, November, December, January, February & March.