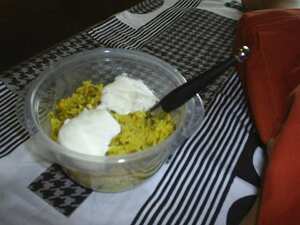 Khichdi (also khichri, khichdee, khichadi, khichuri, khichari and many other variants), is a South Asian rice dish made from rice and lentils (dal). Khichdi is commonly considered to be India and Pakistan's comfort food, and was the inspiration for the Anglo-Indian dish of kedgeree.

Khichdi is a very popular dish in eastern, northern and western India. The dish is widely prepared in many Indian states like Gujarat, Maharashtra and Bengal, where it is called khichhuri. Vegetables such as cauliflower, potato, and green peas are commonly added.

Khichri is a popular dish in Pakistan. It is especially cooked for children and people with stomach problems as it is easily digestable compared to other Pakistani dishes which usually have meat and are also spicy. Although it has a similar name, Khichra is actually a variation of Haleem and is not to be confused with Khichri .

While khichhuri is cooked as a rather rich gourmet delicacy in Bengal, it is cooked very differently in North and Western India - a very plain bland dish usually served to people who are ill. Khichdi is also the first solid that babies are introduced to. Rice and lentils are simmered till mushy, seasoned with turmeric and salt and fed to infants to introduce them to "adult" food. It is also a favourite campfire food owing to the convenience of being able to cook khichdi in a single simmering pot.

Khichdi when well cooked with little oil is considered as a light and nutritious dish and is especially popular amongst many who follow an ayurvedic diet practices or nature cure.

Another form of khichdi, popular mostly in western Maharashtra, is made with prawns.