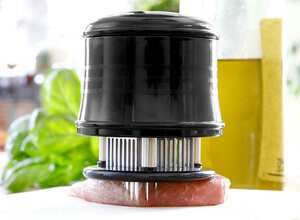 The iTenderizer is just as good as the Jaccard but less than a quarter of the price!

I love my Jaccard meat tenderiser and use it regularly for tenderising meat and especially for making superbly crisp baked potatoes, so I was really cross when I managed to melt it to destruction by leaving it over a wall heater in order to dry it out.

The original was around £65 when I first purchased it but since then there are plenty similar meat tenderisers available and at a fraction of the price. This was the one I chose.

It is exactly the same in functionality, but a little smaller which is good because it takes up far less kitchen space. It is easier to use and far easier to clean. An absolute bargain for £14.95!