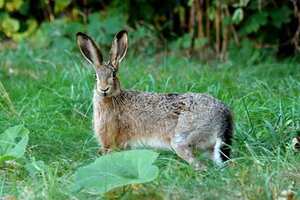 Hares and jackrabbits are leporids belonging to the genus Lepus. (Four other species of leporid in the genera Caprolagus and Pronolagus are also called "hares".) Very young hares, less than one year old, are called leverets.

Hares are very fast-moving. The European Brown Hare (Lepus europaeus) can run at speeds of up to 72 km/h (45 mph). They live solitarily or in pairs, while "a drove of hares" is the collective noun for a group of hares.

Normally a shy animal, the European Brown Hare changes its behaviour in spring, when hares can be seen in broad daylight chasing one another around meadows; this appears to be competition between males to attain dominance (and hence more access to breeding females). During this spring frenzy, hares can be seen "boxing"; one hare striking another with its paws (probably the origin of the term "mad as a March hare"). For a long time it had been thought that this was inter-male competition, but closer observation has revealed that it is usually a female hitting a male, either to show that she is not yet quite ready to mate, or as a test of his determination.

In cooking, jugging is the process of stewing meat (usually whole animals, mainly game, or fish) for a long time in a tightly covered container, such as a casserole or an earthenware jug. Sometimes the cooking liquid includes some of the animal's blood. In French, such a stew of a game animal, thickened with the animal's blood, is known as a civet.

One common traditional dish that involves jugging is Jugged Hare (known as civet de lièvre in France), which is a whole hare, cut into pieces, marinated and cooked with red wine and juniper berries in a tall jug that stands in a pan of water. It traditionally is served with the hare's blood (or the blood is added right at the very end of the cooking process) and Port wine.

"A hare doth no harme nor displeasure to man...yet he maketh gentlemen good pastyme; and better it is for the houndes and dogges to eat the hare after they have killed it, than man should eat thereof, for the Byble sayeth the hare is unclene beaste and doth engendre meloncoly humours."

Hare is at its best and in season during the following months: September, October, November, December, January & February.