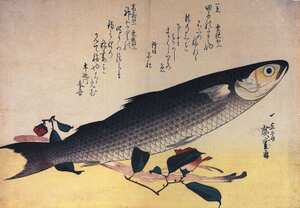 The grey mullet or flathead mullet is an important food fish for many around the world, and can be both fished and farmed. The roe of this mullet is salted, dried and compressed to make a speciality food with different names across the world, such as Korean myeongran jeot, Japanese karasumi, and Italian botargo.

On the coast of northwest Florida and Alabama, this mullet, called the Striped or Black Mullet, is often a speciality of seafood restaurants. Fried mullet is most popular, but smoked, baked, and canned mullet are also eaten. Local fishermen usually catch mullet in a castnet, though some use a hook. Mullet is a delicacy in this area and is most often consumed in the home. Mullet are usually filleted (with the remaining parts used for fish stock) and then used in chowders and stews.

Mullet does not keep well after it is caught. If kept on ice it may remain edible for approximately 72 hours, after which it becomes nearly inedible. The sooner it can be eaten after being caught, the better.

Grey Mullet is at its best and in season during the following months: August, September & October.