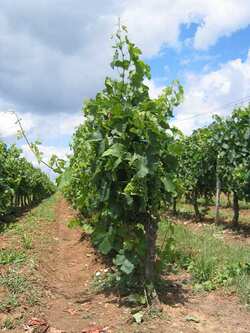 Grapes in a French vineyard

A grape is the fruit that grows on the perennial and deciduous woody vines of the genus Vitis. Grapes can be eaten raw or used for making jam, juice, jelly, vinegar, wine, grape seed extracts and grape seed oil.

Grapes can be dried to produce sultanas, raisins and currants

A raisin is any dried grape. While raisin is a French loanword, the word in French refers to the fresh fruit; grappe (whence the English grape is derived) refers to the bunch (as in une grappe de raisins).

A currant is a dried Zante grape, the name being a corruption of the French raisin de Corinthe (Corinth grape). Note also that currant has come to refer also to the blackcurrant and redcurrant, two berries completely unrelated to grapes.

A sultana was originally a raisin made from a specific type of grape of Turkish origin, but the word is now applied to raisins made from common grapes and chemically treated to resemble the traditional sultana.

The red grape is one of the growing 'superfruits'.

How much does one cup of grapes weigh?

Grapes are at their best and in season during the following months: September & October.