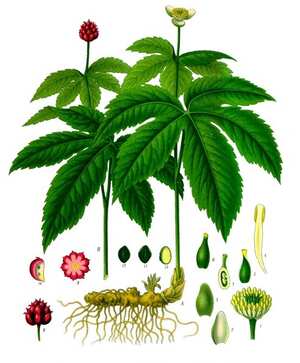 Goldenseal (Orange-root, Orangeroot; Hydrastis canadensis) is a perennial herb in the buttercup family Ranunculaceae, native to southeastern Canada and the northeastern United States. It may be distinguished by its thick, yellow knotted rootstock. The stem is purplish and hairy above ground and yellow below ground where it connects to the yellow rhizome. The plant bears 2 palmate, hairy leaves with 5-7 double-toothed lobes and single, small, inconspicuous flowers with greenish white stamens in the late spring. It bears a single berry like a large raspberry with 10-30 seeds in the summer.

Goldenseal is often used as a multi-purpose remedy, having many different medicinal properties. In addition to working as a topical antimicrobial, it can also be taken internally as a digestion aid, and can remove canker sores when gargled with. Goldenseal may be purchased in salve, tablet, tincture form, or as a bulk powder. Goldenseal is often used to boost the medicinal effects of other herbs it is blended or formulated with.

While goldenseal, like all alkaloid-rich herbs including coffee and tobacco should be avoided during pregnancy and given to very young children with care, it appears that goldenseal is unlikely to be toxic in normal doses. Interactions with drugs with narrow therapeutic windows like Warfarin, cyclosporin, protease inhibitors and cardiac glycosides are potential concerns.

No effectiveness for masking illicit drug use in urine drug tests

Goldenseal became a part of American folklore associated with chemical testing errors, from pharmacist John Uri Lloyd's 1900 novel Stringtown on the Pike where goldenseal is confused with strychnine. It has been used on occasions in this century to attempt to mask the use of morphine in race horses (without success).

Two studies have demonstrated no effect of oral goldenseal on urine drug assays over water alone. Subjects who drank large amounts of water had the same urine drug levels as subjects who took goldenseal capsules along with the water. Because of the popular perception that this is true, drug tests will take the presence of hydrastine in the urine as likely proof that a person being tested is a drug user.

Goldenseal is in serious danger due to over-harvesting. Goldenseal became popular in the mid-nineteenth century. By 1905, the herb was much less plentiful, partially due to over-harvesting and partially to habitat destruction. Wild goldenseal is now so rare that the herb is listed in the Convention on International Trade in Endangered Species of Wild Fauna and Flora. More than 60 million goldenseal plants are picked each year without being replaced. The process of mountain top removal mining has recently put the wild goldenseal population at major risk due to loss of habitat, illegality of removing goldenseal for transplant without registration while destruction in the process of removing the mountain top is permitted, and increased economic pressure on stands outside of the removal area.

There are several berberine-containing plants that can serve as useful alternatives, including Chinese coptis, yellowroot, or Oregon grape root. Many herbalists urge caution in choosing products containing goldenseal, as they may have been harvested in an unsustainable manner as opposed to having been organically cultivated.