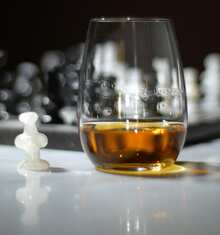 Glycerol is a chemical compound also commonly called glycerin or glycerine. It is a colourless, odorless, viscous liquid that is widely used in pharmaceutical formulations. Glycerol is sweet-tasting and of low toxicity.

In foods and beverages, glycerol serves as a humectant, solvent and sweetener, and may help preserve foods. It is also used as filler in commercially prepared low-fat foods (e.g., cookies), and as a thickening agent in liqueurs. Glycerol also serves as a way, along with water, to preserve certain types of leaves. Glycerol is also used as a sugar substitute. In this regard, it has approximately 27 calories per teaspoon and is 60% as sweet as sucrose. Although it has about the same food energy as table sugar, it does not raise blood sugar levels, nor does it feed the bacteria that form plaques and cause dental cavities.

As a food additive, glycerol is also known as E number E422.