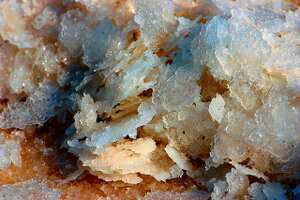 Flor De Sal ("Flower of salt" in Portuguese) ; Fleur de sel ("Flower of salt" in French) is a hand-harvested sea salt collected by workers who scrape only the top layer of salt before it sinks to the bottom of large salt pans. Traditional French fleur de sel is collected off the coast of Brittany most notably in the town of Guérande (Fleur de Sel de Guérande being the most revered), but also in Noirmoutier, Ile de Ré and Camargue.

As well, Flor De Sal is largely produced in Portugal, being commercialized worldwide from the ancient salt production regions existing in this country, by traditional methods, with high certified quality standards. It is an artisanal food product. Due to its relative scarcity, Flor De Sal (flower of salt / fleur de sel) is one of the more expensive salts.