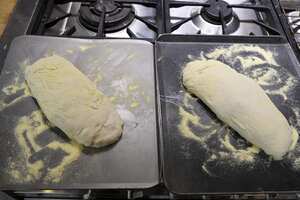 . My loaves puffed up to about twice the volume but the size stayed roughly the same.