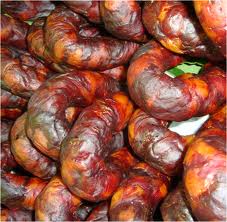 ‘Chouriço Azedo de Vinhais’ aka ‘Azedo de Vinhais’ or ‘Chouriço de Pão de Vinhais’ is a smoked IGP sausage from Portugal. It is made from the meat and fat of pigs of the Bisaro breed or of cross-breeds that must be 50 % Bisaro (F1 animals, produced by cross-breeding pure-bred Bisaro pigs registered in the herdbook with pigs of other breeds), regional wheat bread and olive oil from Trás-os-Montes (these being essential for giving the product a specific taste and texture), stuffed into a pig's large intestine. One end of the intestine is tied or sewn up and then twisted, one or two more knots are then made and, when the intestine has been stuffed, the other end is tied with cotton thread. The sausage is a straight, cylindrical shape with an average length of 20 to 25 cm, 7 to 10 cm in diameter and yellow-brown in colour. The inside is also yellow brown in colour and it appears homogeneous when cut. The final weight is approximately 300 g.

Link to the area

Various zoomorphic sculptures and references made to taxes on pigs and their by products in different municipal registers in the region prove that pig-breeding has been important in this area for a very long time. The relationship between the product and the geographical area stems from the (indigenous) breed of animal, the local sources of nutrition used, the know-how in terms of selection of the cuts of meat, slow smoking using regional firewood and a curing process that takes place in very cold and dry locations in the region.