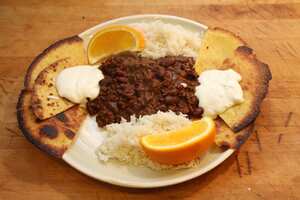 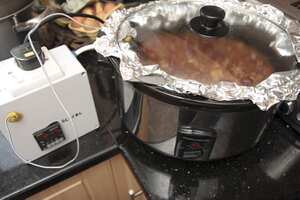 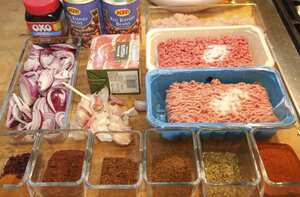 Ok, I had better fess up, this is another of my experiments, documented so it can be easily replicated if it is a success. This recipe is not cooked sous-vide in the way you would normally. I don't have a 6 litre sous-vide cooker, I've used my home-made sous-vide cooker and instead of cooking in a vacuum sealed bag, I've just used the slow cooker with scrunched up baco-foil to provide a better seal. This could be simply replicated in a slow cooker that has a very accurate temperature setting, should such a thing exist outside of my house!

If you are luck enough to have a sous-vide cooker that can accomodate 6 litres I would be inclined to premix everything in a bowl first and vacuum seal but manually seal the container before liquid is drawn into the vacuum sealer.

The recipe is very similar to the original , The Manhattan Chili Co's famous ‎Chili con carne numero uno. The main differences are that I've used leeks instead of onions and altered the cooking method .

This was not very successful - the prolonged cooking time make the oregano and cinnamon far too strong - stick to the original - it's far better!

1 cup in this recipe represents 237 ml

I'm using this as the basis for Frito pie.