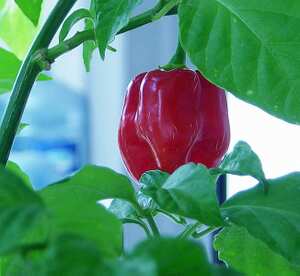 The Red Savina pepper is a cultivar of the habanero chile (Capsicum chinense Jacquin), which has been selectively bred to produce hotter, heavier, and larger fruit.

Frank Garcia of GNS Spices, in Walnut, California, is credited with being the developer of the Red Savina habanero. The exact method Garcia used to select the hottest strains is not publicly known.

In February 2007 the Red Savina chili was displaced in Guinness World Records as the hottest chili in the world by the Naga Jolokia pepper. The Red Savina held the record from 1994 until 2006.