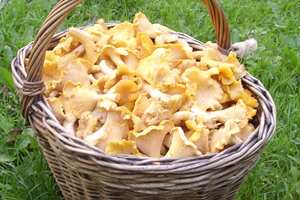 Chanterelles, (genus Cantharellus) are a group of popular edible mushrooms. They are mycorrhizal fungi, meaning they form symbiotic associations with plants, making them very difficult to cultivate. Caution must be used when identifying chanterelles for consumption due to lookalikes, such as the Jack-O-Lantern (Omphalotus olearius), which can make a person very ill. Despite this, chanterelles are one of the most recognised groups of edible mushrooms and can be found in Asia, Europe, North America and Australia.

The name comes from the Greek kantharos meaning tankard.

Chanterelles in general go well with eggs, curry, chicken, pork, fish, beef and veal, can be used as toppings on pizzas, be stewed, marinated, sautéed, or used as filling for stuffed crêpes.