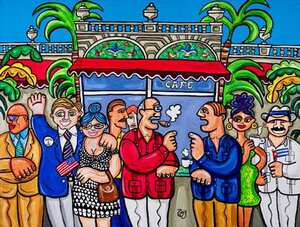 Other suppliers to try would be Mexican / TexMex suppliers, Indian suppliers or spice suppliers.

The other traditional Cuban side dish is black beans and rice, an extremely nutritious and delicious Cuban specialty. Cuban desserts are sweet and a Cuban bakery is similar to a French patisserie due to its complex collection of Cuban specialties like Tres Leches, Pudin Diplomatico and Alfajores (borrowed from Argentinian culture).

In Miami, Colombian, Brazilian, Southern, Argentinian, Honduran and Guatemalan subcultures contribute to the vibrant food scene, and have ultimately influenced Cuban Cuisine....So the Cubans have adopted the hearts of palm for their salads from Coast Rica, Ceviche from Peru, Chimichurri sauce from Argentina, and Callaloo from Jamaica, for examples, to create a vibrant and growing Cuban food culture.