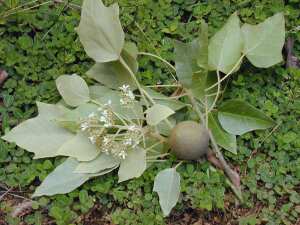 Its native range is impossible to establish precisely because of early spread by humans, and the tree is now widely distributed in the New and Old World tropics. It grows to a height of 15-25 m, with wide spreading or pendulous branches. The fruit is round, 4–6 cm in diameter; the nut (seed) inside has a very hard seed coat and a high oil content, which allows its use as a candle, hence its name.

Modern cultivation is mostly for the oil. In plantations, each tree will produce 30–80 kg of nuts, and the nuts yield 15 to 20% of their weight in oil. Most of the oil is used locally rather than figuring in international trade.

In Hawaii the Candlenut tree is a symbol of enlightenment, protection and peace. Candlenut was considered to be the body form of Kamapua'a, the pig god. One of the legends told about a woman who, despite her best efforts to please her husband, was routinely beaten. Finally, the husband beat her to death and buried her under a kukui tree. Being a kind and just woman, she was given new life, and the husband was eventually killed.