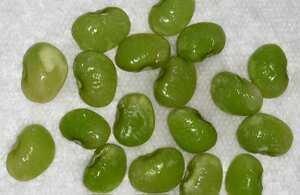 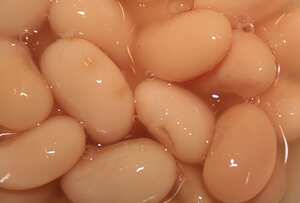 Phaseolus lunatus is a legume. It is grown for its seed, which is eaten as a vegetable. It is commonly known as the lima bean or butter bean; it is also known as Haba bean, Pallar bean, Burma bean, Guffin bean, Hibbert bean, Sieva bean, Rangood bean, Madagascar bean, Paiga, Paigya, prolific bean, civet bean, sugar bean or đậu ngự (Vietnamese).

The P. lunatus is of Andean and Mesoamerican origin. Two separate domestication events are believed to have occurred. The first, taking place in the Andes around 2000 BC, produced a large-seeded variety (Lima type), while the second, taking place most likely in Mesoamerica around AD 800, produced a small-seeded variety (Sieva type). By 1301, cultivation had spread to North America, and in the sixteenth century the plant arrived and began to be cultivated in the Eastern Hemisphere.

The Moche Culture (1-800 AD) cultivated lima beans and often depicted them in their art. During the Spanish Viceroyalty of Peru, lima beans were exported to the rest of the Americas and Europe, since the boxes of such goods had their place of origin labeled "Lima - Peru", the beans got named as such.

Both bush and pole (vine) varieties exist, the latter from one to four meters in height. The bush varieties mature earlier than the pole varieties. The pods are up to 15 cm long. The mature seeds are 1 to 3 cm long and oval to kidney shaped. In most varieties the seeds are quite flat, but in the "potato" varieties the shape approaches spherical. White seeds are common, but black, red, orange and variously mottled seeds are also known. The immature seeds are uniformly green.

The term butter bean is widely used for a large, flat, and white variety of lima bean (P. lunatus var. macrocarpus, or P. limensis), however, in the Southern United States the Sieva type are traditionally called butter beans, also otherwise known as the Dixie or Henderson type. In that area, lima beans and butter beans are seen as two distinct types of beans. However, in highland areas of the southern Appalachians where Lima beans will not mature, certain traditional varieties of runner beans are known as butter beans, causing some confusion. In the United Kingdom, a "butter bean" is a dried bean which can be purchased either to re hydrate (in the same manner as dried peas) or as canned (tinned) and ready to use. In culinary use, lima beans and butter beans are distinctly different, the former being small and green, the latter large and yellow. In areas where both are considered to be lima beans, the green variety may be labeled as "baby" limas.

How to cook lima beans in a pressure cooker