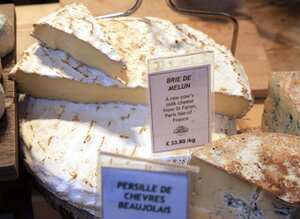 Brie de Melun is an AOP soft cheese made from raw cows’ milk with a fine crust covered in a felt-like white coating lightly marked with red. Brie de Melun is produced in the form of a flat cylinder with an average weight of 1-5 kg.

The Brie region, a fertile clay plateau, plus some adjacent communes belonging to the départments of Aube and Yonne. The area in which Brie de Melun may be produced corresponds to its original home area, characterised by humid valleys. The traditional techniques once used on the farm have been preserved and are still used by the production units, which have remained small craft businesses, and the refiners, who pass on skills which help to determine the qualities of the finished product.

It seems that Brie de Melun, of very ancient origin, is the ancestor of all Brie cheeses and that, like its cousin the Brie de Meaux. It was appreciated by rulers and eulogised by writers and poets. So as to safeguard its specific qualities and the skills involved in a particularly painstaking and delicate production process, the producers of Brie de Melun applied in 1978 for the Appellation d'Origine Controlée and obtained it in August 1980.

Once the rennet has been added, the milk undergoes coagulation for at least 18 hours. The curds are put into moulds manually with a ladle and drain for around 36 hours. After its removal from the mould, the cheese is dry-salted, which is always done by hand, then put into the cellar, where it matures for at least four weeks.