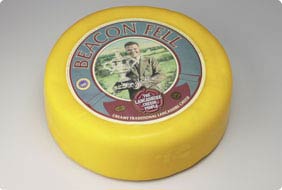 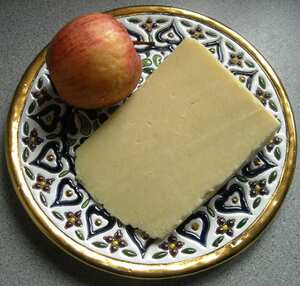 Beacon Fell traditional Lancashire is a PDO cheese produced with full-fat cows’ milk. It contains a minimum of 48% butter fat in the moisture free substance and a maximum moisture content of 48%. The cheese is made in traditional cylindrical form.

Flavour: - in a young cheese, clean and mellow, in a mature cheese, quite sharp and tangy.

Texture: - loose and open with a buttery feel, the mature version being reasonably spreadable.

The area in which the milk is produced and where the cheese is made and matured is defined as the Fylde area of Lancashire north of the River Ribble and to the boundaries defined in the Ordinance Survey Map of Preston and Blackpool district of Lancashire No:M726 Sheet 102, Edition 8 GSGS.

Traditional Lancashire cheese has been exclusively produced in the Fylde, North Preston and Garstang areas for generations. The buttery texture and mellowness of the cheese is attributable to the sandstone bedrock of this part of Lancashire and thus its soft water and lush grazing. This area also has a moderate climate due to its proximity to the coast and the "Gulf Stream"; there are no extremes of temperature and therefore the fat constituents of the milk are relatively consistent.

The prevailing westerly winds also give the designated area relatively high rainfall which adds to the lushness of the grazing and the cleanliness of the grass ie low amounts of dust and therefore coiform bacteria. Added to the above are the traditional skills which have been carefully preserved by the dedicated cheese makers in the area, skills which differ widely from other cheese making methods and are not used outside the designated area.

It was during the reign of Henry II in 1179 AD Preston was awarded its first Royal Charter for fairs and markets, at which much cheese produced on the farms of North Lancashire was sold. Records show that Traditional Lancashire was first manufactured on the farms of the Fylde, North of the River Ribble. In 1832 in response to a petition from the Chief cheese Makers of the Fylde, Preston Town Council decided to hold four cheese Fairs per annum. However, production was varied up until the late 1800's and, therefore, the product was not consistent. It was about this time that Joseph Gornall of Garstang was commissioned by Lancashire County Council to tour Lancashire farms to teach the farmers a standard method of production. This he did, and also wrote several books on the subject. Mr Gornall's methods were closely followed in the Agriculture Ministry's Handbook on Cheesemaking in 1956 and true Traditional Lancashire is still manufactured in the same way today, with the exception of minor alterations brought about by improved technology.

Traditional Lancashire cheese is seeing a moderate revival, but, over the last 50 years, for various reasons, it almost 'died out'. Before the war years there were over 200 farms and a few creameries producing c4800 tonnes per annum: today there are only five farms and six creameries producing 1650 tonnes per annum. The first blow was the Second World War. Production was banned in favour of hard cheese, as hard cheese could be cut into ration portions more easily. The cheese never really recovered, and in 1948 there were only 22 farms manufacturing the same.

The second blow came in the 60's and 70's with the development of an 'imitation' Lancashire. This was very much welcomed by the larger manufacturers as it could be mass produced in a 'production line' or flow system, whereas Traditional Lancashire could not. The larger companies could afford to manufacture and give the name Lancashire to this imitation variety; a characterless white, acid and crumbly textured cheese, which has debased the qualities of a creamy Traditional Lancashire. Because the Lancashire cheese Makers Association did not realise the threat this poor quality product could have to its own product, it did nothing to prevent this happening and is therefore not entirely blameless. Thankfully several manufacturers persevered and the true Lancashire cheese may yet to be restored to its former glory, and beyond.

The Lancashire Cheese Association was formed in the early I9OOs and was once a large organisation with 30 or 40 members. Precise records are not available. The war years and following shortages of both labour and resources debilitated this and now there are just 6 members with another 5 manufacturers in the Farmhouse scheme. The true product is not currently manufactured outside our designated area, and according to the knowledge of our members never has been. The method and skill that we use have been passed down through generation after generation and all closely follows the teaching of Joseph Gornall. The Association is committed to promote Traditional Lancashire, but requires that its tradition be protected so as to ensure that imitations cannot debase its name and degenerate its levels of quality once again.

Beacon Fell Traditional Lancashire cheese is made by the following producers. Together they produce approximately 1650 tonnes of the cheese per annum to supply a market worth approximately £5,000,000.