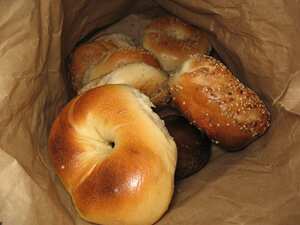 A bagel is a bread product, traditionally made of yeasted wheat dough in the form of a roughly hand-sized ring which is first boiled in water and then baked. The result is a dense, chewy, doughy interior with a browned and sometimes crisp exterior. Bagels are often topped with seeds baked onto the outer crust, with the traditional being poppy or sesame seeds. Some have salt sprinkled on the surface of the bagel.

Bagels have become a popular bread product in the United States, Canada and the United Kingdom especially in cities with large Jewish populations, such as Boston, Chicago, New York, Los Angeles, Montreal, Toronto, London and Leeds, each with different ways of making the bagel. Like English muffins and other bakery products, bagels are available (either fresh or frozen, and often in many flavour varieties) in practically all major supermarkets.

Bagels were derived from the similarly shaped doughnuts and from the similarly textured bialys, primarily because of the cooking method amongst other differences. Russian bubliks are very similar to bagels, but are somewhat bigger, have a wider hole, and are drier and chewier. Pretzels, especially the large soft ones, are also much like bagels, the main exceptions being the shape and the alkaline water bath that makes the surface dark and glossy.

Bagels with cream cheese and lox (cured salmon) are considered a traditional part of American Jewish cuisine (colloquially known as lox and a schmear).

At its most basic, traditional bagel dough contains wheat flour (without germ or bran), salt, water, and yeast leavening. Bread flour or other high gluten flours are preferred to create the firm and dense bagel shape and texture. Most bagel recipes call for the addition of a sweetener to the dough, often barley malt (syrup or crystals), honey, or sugar. Leavening can be accomplished using either a sourdough technique or using commercially produced yeast.

Bagels are traditionally made by:

It is this unusual production method which is said to give bagels their distinctive taste, chewy texture, and shiny appearance. In the context of Jewish culture, this process provided an additional advantage in that it could be followed without breaking the no-work rule of the Sabbath. The dough would be prepared on the day before, chilled during the day, and boiled and baked only after the end of the Sabbath, therefore using the Sabbath as a productive time in the bagel-making process (as the dough needs to slowly rise in a chilled environment for a time before cooking).

In recent years, a variant of this process has emerged, producing what is sometimes called the steam bagel. To make a steam bagel, the process of boiling is skipped, and the bagels are instead baked in an oven equipped with a steam injection system. In commercial bagel production, the steam bagel process requires less labor, since bagels need only be directly handled once, at the shaping stage. Thereafter, the bagels need never be removed from their pans as they are refrigerated and then steam-baked. The steam-bagel is not considered to be a genuine bagel by purists, as it results in a fluffier, softer, less chewy product more akin to a finger roll that happens to be shaped like a bagel.