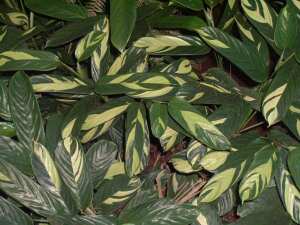 Arrowroot is used as an ingredient in biscuits, puddings, jellies, cakes, hot sauces etc., and also with beef tea, milk or veal broth, noodles in Korean cuisine, or boiled with a little flavouring added as an easily digestible food for children and people with dietary restrictions. The lack of gluten in arrowroot flour makes it ideal as a replacement for wheat flour in baking. Arrowroot makes clear, shimmering fruit gels and prevents ice crystals from forming in homemade ice cream. It can also be used as a thickener for acidic foods, such as oriental sweet and sour sauce.

Arrowroot thickens at a lower temperature than flour or cornstarch. It is recommended to mix arrowroot first with a cool liquid before adding to a hot fluid. The mixture should be heated only until it thickens and then removed immediately to prevent it from thinning. Overheating tends to break down its thickening properties. Substitute two teaspoons of arrowroot for one tablespoon of cornflour, or one teaspoon of arrowroot for one tablespoon of wheat flour.

Cornflour is an alternative flour to use for thickening soups or stocks.