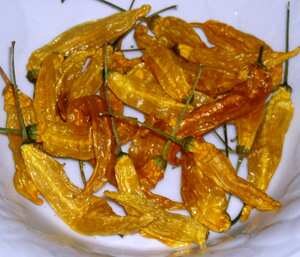 Ají limón (aka Peruvian Yellow)is 4.5cm long by 2cm wide of the pendulum variety of Capsicum baccatum. It is pale yellow-green to lemon yellow when ripe and is thin skinned. It has an elongated and flattened pod tapering to a point. It is an Andean type of aji and grows on large bushy plants. It has a citrus and herby flavour and a heat level of 7. It goes well with fish and shellfish, as well chicken, ceviche, salsas, mojo, and salads.

Ají rojo (aka Ají Red or Puca Uchu) is 10-15cm long. The large plants can grow upto 90cm tall by 90cm across and are prolific producers of the long pendant shaped pods which mature from green to deep orange/red. They have a long growing season and have a heat level of 6. Their flavour has a hint of raspberries and they are suited to poultry and fish dishes.

Ají amarillo (aka Ají Yellow) is the most common ají in Peru. "Amarillo" means yellow, but although they are named yellow chilli peppers, their colour changes to orange as they mature. The fruits are 10cm-15cm long, gave a thin flesh and a fruity flavour with berry overtones. They have a searing, clear pungency and a heat level of 6-7. Whilst the ají is produced mostly on the Peruvian coast, it is also grown in the Andes and the Amazon jungle. The harvest season on the coast, where most of the Aji Amarillo is planted, begins in mid-December and continues until late March. These plants can reach 1.5-2 metres in a single season. The fruits are usually dried and powdered for use in many Peruvian and Bolivian dishes. The famous Peruvian chef Gastón Acurio recently named ají amarillo the most important ingredient in Peruvian cooking. It is used in many classic Peruvian dishes, such as Causa rellena and Papas a la huancaina.