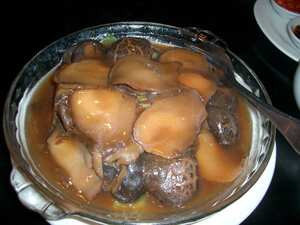 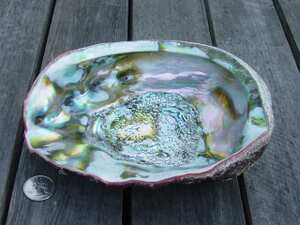 Inside of an abalone shell

Abalone (from Spanish abulón) are small to very large-sized edible sea snails, marine gastropod mollusks in the family Haliotidae and the genus Haliotis. Common names for abalones also include ear-shells, sea ears, as well as muttonfish or muttonshells in Australia, ormer in Great Britain, perlemoen and Venus's-ears in South Africa and pāua in New Zealand.

The meat (foot muscle) of abalone is used for food, and the shells of abalone are used as decorative items and as a source of mother of pearl. The meat of this mollusk is considered a delicacy in certain parts of Latin America (especially Chile), France, New Zealand, Southeast Asia, and East Asia (especially in China, Japan, and Korea). In China abalone sometimes forms part of a Chinese banquet. Similar to shark fin soup or birds nest soup, it is considered a luxury item, and is traditionally reserved for special occasions such as weddings and other celebrations. However, the availability of commercially farmed abalone has allowed more common consumption of this once rare delicacy.

In Japan, live and raw abalone are used in awabi sushi, or served steamed, salted, boiled, chopped, or simmered in soy sauce. Salted, fermented abalone entrails are the main component of tottsuru, a local dish from Honshū. Tottsuru is mainly enjoyed with saki.