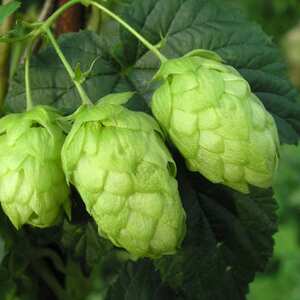 CHOP Žatecký chmel is a hop from the Czech Republic. A specific property of ‘Žatecký chmel’ is the appearance of the cone (moderately to elongated ovoid, 100 cones weighing 13-17 g; strig fine, regular, 12-16 mm in length), the delicate hoppy aroma and the golden colour of the lupulin. Characteristic features of ‘Žatecký chmel’ are the red colour of the bine, the fine strig, a low myrcene content and a balanced alpha and beta acid content. Typical of the composition of the hop resins is a relatively low alpha-bitter acid content. The beta-bitter acid content is higher than the alpha-bitter acid content. The myrcene content is 25-40 %. Another characteristic feature is the presence of a large amount of beta-farnesene (14-20 %), which in other hops is present only in very small amounts. The general character of the fragrance of ‘Žatecký chmel’ is determined by the ratio between all the individual constituents of the hop oils. ‘Žatecký chmel’ hops are semi-early. They are supplied to the market pressed or granulated.

‘Žatecký chmel’ hops are grown in what is termed the Žatec hop-growing area. This comprises cadastral areas in the districts of Louny, Rakovník, Chomutov, Kladno, Plzeň- sever and Rokycany. Further details are provided in the specification.

‘Žatecký chmel’ hops are grown on hop-poles in the Žatec hop-growing area. The springtime work begins in April with cutting and wiring, followed by training, cultivation and the application of chemical protection. During the growing period, a number of spraying operations are carried out in order to control pests and diseases. The hops are harvested in the second half of August and early September. The hops are processed into pressed or granulated hops. The hop-poles are constructed of wooden (and in some cases concrete) posts. Wire is also used, or steel rope in the case of new hop-poles. The hop-poles are about 7 metres high (optimum height for hops grown in this area). One hectare of hop garden contains 2500-3500 hop plants, depending on planting density (determined by farming techniques, the growth properties of the plants and crop structure optimisation).

Hops are a perennial plant that remains on the same site for up to 20 years. Only female plants are grown for production purposes in a hop garden. The presence of male plants is undesirable in terms of its effects on the quality of the hops.

It is the specific natural conditions in the Žatec hop-growing area that provide the basis for the uniqueness of ‘Žatecký chmel’. This area is protected to the north-west by the Ore Mountains, the Doupov Hills and the Bohemian uplands, which produce a rain shadow. The total annual rainfall in this area is therefore only about 450 mm. The timing of the rainfall is, however, favourable to the development of the hops (average rainfall during the growing period is about 260 mm). The average annual temperature is 8-9 °C (but 14-16 °C during the growing period). The quality of the hops is determined not only by the climatic conditions but also by the area's soil. This consists mainly of Permian red-bed soils, but there are also lighter sandy marl soils. The growth and development of the hops is also influenced by the situation of the hop gardens, which is determined in particular by the altitude (200-500 metres above sea level) and the position within the lie of the land, the gradient and exposure to the different points of the compass.

The hop gardens are located in particular in broad, open valleys with a free airflow which are sufficiently sheltered from strong west and north winds. The hops would not achieve such quality or yields in other areas, where these conditions do not exist. The environment has an influence in particular on the content and growth of the hops. The conditions described above (combination of average rainfall, temperatures, soil profiles, altitude and light) are unique to the Žatec hop-growing area. Other hop-growing areas in the world will always differ in respect of certain of the basic conditions (e.g. higher rainfall, higher average temperatures, shorter average length of day/daylight during the growing period).