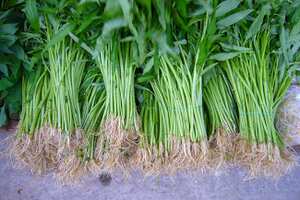 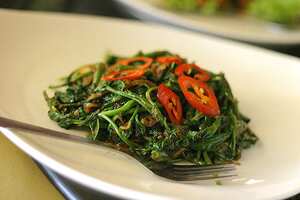 Ipomoea aquatica is a semi-aquatic tropical plant grown as a leaf vegetable. Its precise natural distribution is unknown due to extensive cultivation, with the species found throughout the tropical and subtropical regions of the world.

Ipomoea aquatica grows in water or on moist soil. Its stems are 2-3 m or more long, hollow, allowing them to float, and these root at the nodes. The flowers are trumpet-shaped, 3-5 cm diameter, usually white in colour.

It is most commonly grown in East and Southeast Asia. Because it flourishes naturally in waterways and does not require much if any care, it is used extensively in Malay and Chinese cuisine, especially in rural or kampung (village) areas. It is not to be mistaken with watercress, which often grows in similar situations.

It has also been introduced to United States of America where its high growth rate caused it to become an environmental problem, especially in Florida and Texas. It has been officially designated by the USDA as a "noxious weed." Despite this ominous label, the plant is not in any way harmful when consumed ("noxious" is, in this context, a legal term denoting the plant's harmfulness to native plants). In fact, the plant is similar to spinach in its nutritional benefits.

The vegetable is a common ingredient in Southeast Asian dishes. In Singapore, Indonesia and Penang, the leaves are usually stir fried with chile pepper, garlic, ginger, dried shrimp paste (belacan/terasi) and other spices. In Penang and Ipoh, it is cooked with cuttlefish and a sweet and spicy sauce. During the Japanese Occupation of Singapore in World War II, the vegetable grew remarkably well and easily in many areas, and become a popular wartime crop.

In Chinese cuisine, there are numerous ways of preparation, but a simple and quick stir-fry either plain or with minced garlic is probably the most common. In Cantonese cuisine, a popular variation adds preserved beancurd - a method known in the Mandarin language as furu (pickled tofu). In Hakka cuisine, yellow bean paste is added, sometimes along with fried shallots. The vegetable is also extremely popular in Taiwan, where it grows well.

In Thailand it is frequently stir fried with oyster sauce and shrimp paste. It can be eaten raw with Lao green papaya salad.

In Vietnam, it once served as a staple vegetable of the poor (known as rau muống). In the south, the stems are julienned into thin strips and eaten with many kinds of noodles, and used as a garnish as well.

In the Philippines, it is usually sauteed in cooking oil, onions, garlic, vinegar, and soy sauce. This dish is called "adobong kangkong". It is also a common leaf vegetable in sour fish and meat stews like "sinigang".

There is concern that, eaten raw, the plant could transmit fasciolopsiasis, a parasite of humans and pigs.