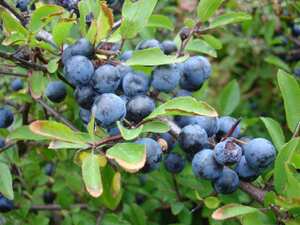 Blackthorn or Sloe, (Prunus spinosa) is a species of Prunus native to Europe, western Asia, and locally in northwest Africa. They are thin-fleshed, with a very strongly astringent flavour when fresh. They are the ancient ancestor of all types of plum, but their legendary sourness makes them difficult to cook with.

Sloe or blackthorn is a deciduous large shrub or small tree growing to 5 m tall, with blackish bark and dense, stiff, spiny branches. The fruit, called a "sloe" is a drupe 10–12 mm diameter, black with a pale purple-blue waxy bloom, ripening in autumn, and harvested in October or November - usually after the first frosts. Frost and late harvesting help reduce the worst elements of the flavour. Shrivelling berries are too late to use for food. Freezing the berries after picking doesn't have the same result as frost when on the plant.

The fruit is similar to a small damson or plum, suitable for preserves, but too tart and astringent for eating, unless deeply frozen, as is practised in eastern Europe.

In rural Britain so called sloe gin is made from them, though this is not a true gin but an infusion of vodka, gin, or neutral spirits with the fruit to produce a liqueur. The bottle is packed with whole sloes and the alcohol added. If the sloes are hard they need to be pricked, but this produces a cloudy drink. Sugar must be added.

In Navarre, Spain, a popular liqueur called patxaran is made with sloes.

Sloes used for alcohol can then be reused for jam or chocolate.

Process as usual, adding pectin or some pectin-rich fruit.

Sloe works well in pies, but needs to be limited to around 10% of the fruit content. A pie with just sloes would be unpalatable. 9 parts apple to 1 part sloe works well. A lot of sweetener is required.

Preserved in vinegar, they are similar in taste to Japanese umeboshi. Vinegar may be mixed into sloe puree with some sweetening; all types of vinegar produce a good result.

Madras curry spices and an equal amount of sloe puree make a nice curry paste. Ensure enough sweetness is added, in the form of sugar, sweetener or fruit.

Alcohol soaked sloes are often broken up and used in chocolate. It keeps well due to the alcohol.

Sloes are useful in photography. Give a child a raw sloe, have a camera ready, and catch the grimaces of horror and complete disgust.

Sloes dye without need for a mordant. The colour produced is a rich magenta-pink, which fades to a permanent light blue.

Sloe is prone to staining some cookware & tableware. Persisting stains can be removed from ceramics and plastics with fuming hydrochloric acid. This is vicious stuff though, time will tell if there are less antisocial cleaners that also work. (Fuming HCl eats through flesh, and should not be handled by anyone not suitably skilled and prepared.)