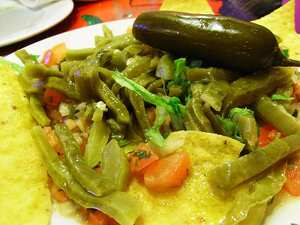 Nopales or paddle cactus, is a genus in the cactus family, Cactaceae.

The most commonly culinary species is the Indian Fig Opuntia (O. ficus-indica). Most culinary uses of the term "prickly pear" refer to this species. Prickly pears are also known as "tuna", "nopal" or nopales, from the Nahuatl word nōpalli for the pads, or nostle, from the Nahuatl word nōchtli for the fruit; or paddle cactus (from the resemblance to the ball-and-paddle toy). This and similar species are native to Mexico.

The fruit of prickly pears, commonly called cactus fruit, cactus fig, Indian fig or tuna in Spanish, is edible, although it has to be peeled carefully to remove the small spines on the outer skin before consumption. If the outer layer is not properly removed, glochids can be ingested, causing discomfort of the throat, lips, and tongue, as the small spines are easily lodged in the skin.

Nopales are generally sold fresh in Mexico. In more recent years bottled, or canned versions are available mostly for export. Less often dried versions are available. Used to prepare nopalitos, they have a light, slightly tart flavour, like green beans, and a crisp, mucilaginous texture. In most recipes the mucilaginous liquid they contain is included in the cooking. They are at their most tender and juicy in the spring.