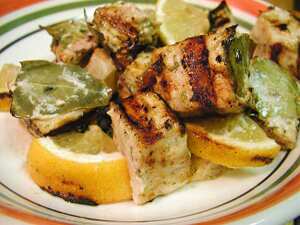 Swordfish is a particularly popular fish for cooking. Since swordfish are large animals, their meat is usually sold as steaks which are often grilled. The colour of the flesh varies by their diet, with fish caught on the east coast of North America often being rosier.

Similar to tuna in look, flavour and texture, swordfish is a strongly flavoured meaty fish which often benefits from robust marinades such as those used in Asian dishes. It is particularly well suited to barbecuing and grilling.

As with tuna, cover with tin-foil, keep warm and allow to rest for 5 minutes once cooking has finished.