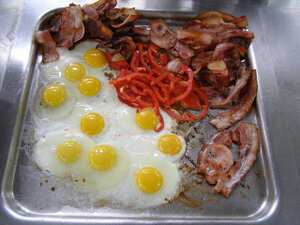 Bacon and eggs frying on an electric griddle

Frying is the cooking of food in oil or fat, a technique that originated in ancient Egypt around 2500 BC. Chemically, oils and fats are the same, differing only in melting point, but the distinction is only made when needed. In commerce, many fats are called oils by custom, e.g. palm oil and coconut oil, which are solid at room temperature.

Fats can reach much higher temperatures than water at normal atmospheric pressure. Through frying, one can sear or even carbonise the surface of foods while caramelising sugars. The food is cooked much more quickly and has a special crispness and texture. Depending on the food, the fat will penetrate it to varying degrees, contributing richness, lubricity, and its own flavour.

Frying techniques vary in the amount of fat required, the cooking time, the type of cooking vessel required, and the manipulation of the food. Sautéing, stir frying, pan frying, shallow frying, and deep frying are all standard frying techniques.

Sautéing and stir frying involve cooking foods in a thin layer of fat on a hot surface, such as a frying pan, griddle, wok, or sauteuse. Stir frying involves frying quickly at very high temperatures, requiring that the food be stirred continuously to prevent it from adhering to the cooking surface and burning.

Shallow frying is a type of pan frying using only enough fat to immerse approximately one third to one half of each piece of food; fat used in this technique is typically only used once. Deep frying, on the other hand, involves totally immersing the food in hot oil, which is normally topped up and used several times before being disposed. Deep frying is typically a much more involved process, and may require specialised oils for optimal results.

Deep frying is now the basis of a very large and expanding worldwide industry. Fried products have great consumer appeal in all age groups, and the process is quick, can easily be made continuous for mass production, and the food emerges sterile and dry, with a relatively long shelf life. The end products can then be easily packaged for storage and distribution. Examples are potato chips, french fries, nuts, doughnuts, instant noodles, etc.

Air frying is when air heated to around 200° C (400° F) is circulated around the food as it is slowly moved around a pan. A small amount of oil is added which coats the food evenly and due to the heat, fries the surface of the food as well as also cooking the inside of the food.