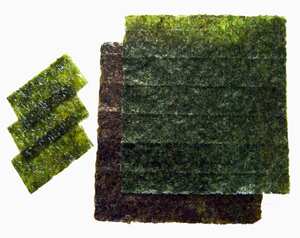 Roasted sheets of seaweed used in Japanese cuisine for sushi.

Seaweed is a term for multiple varieties of marine algae. This includes some members of the red, brown and green algae. Seaweeds can also be classified by their use (as food, medicine, fertilizer, industrial, etc.).

In Asia, Zicai (in China), gim (in Korea) and nori (in Japan), sheets of dried Porphyra are used in soups or to wrap sushi.

Porphyra is a red alga used in Wales to make laver. Laverbread, made from oats and the laver, is a popular dish in Wales.

Affectionately called "Dulce" in northern Belize, seaweeds are mixed uniquely with milk, nutmeg, cinnamon, and vanilla to be served as a common beverage throughout the country.

Despite its name, Chinese crispy seaweed is not seaweed at all, but prepared cabbage, fried in spices.