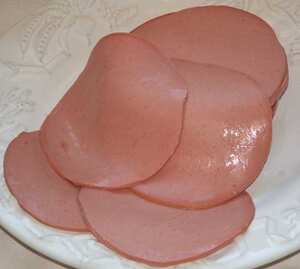 Bologna sausage is an American sausage somewhat similar to the Italian mortadella, (a finely hashed/ground pork sausage containing cubes of lard that originated in the Italian city of Bologna). US Government regulations require American bologna to be finely ground, and it does not contain visible pieces of fat. Bologna can alternatively be made out of chicken, turkey, beef, or pork. It is commonly called bologna and often pronounced and/or spelled baloney. The origin of the name also comes from the origin of mortadella, which is native to Bologna.

Bologna sausage is generally made from low quality scraps of meat cuts. Such may be the origin of the slang word baloney, meaning "nonsense".

Britain has Polony, now only truly popular in West Yorkshire, which is a finely ground white sausage meat tasting peppery with an aroma not dissimilar to Irish-blend breakfast sausages or even white pudding. It usually has bright red casing.