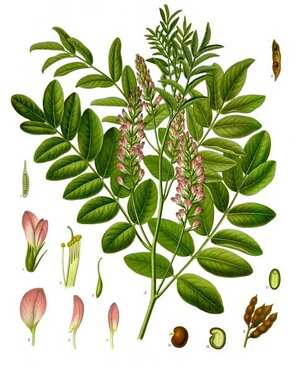 A cross-section of licorice root

What is Licorice root

Liquorice root candy, or properly Glycyrrhiza glabra, is the dried root of the liquorice plant, which is eaten as a candy.

Sticks of liquorice typically have a diameter between two and ten millimetres. Although they look like plain wooden sticks, they are soft enough to be chewed on. They used to be a popular confection.

The extract of the liquorice root is one of the main ingredients in liquorice confectionery.

People with heart conditions or high blood pressure should avoid ingesting extensive amounts of liquorice, as it can further heighten blood pressure.

Licorice growing in the United Kingdom

Pontefract's deep, sandy soil makes it one of the few British places in which liquorice can be successfully grown. The town has a liquorice-sweet industry; and the famous Pontefract Cakes are still produced, though the liquorice plant itself is no longer grown there. The town's two liquorice factories are owned by Haribo (formerly known as Dunhills) and Monkhill Confectionery [part of the Cadbury's Group] (formerly known as Wilkinson's), respectively. A Liquorice Festival is held each year. Poet laureate Sir John Betjeman wrote a poem entitled "The Liquorice Fields at Pontefract".