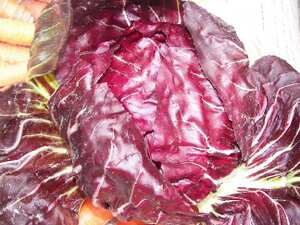 Radicchio is a leaf chicory (Cichorium intybus, Asteraceae), sometimes known as Italian chicory. It is grown as a leaf vegetable which usually has white-veined red leaves. It has a bitter and spicy taste, which mellows when it is grilled or roasted. It can also be used to add colour and zest to salads.

In Italy, where the vegetable is quite popular, it is usually eaten grilled in olive oil, or mixed into dishes such as risotto: in the United States it is gaining in popularity but is more often eaten raw in salads. As with all chicories, if grown correctly its roots can be used to mix with coffee. It can also be served with pasta, in strudel, as a poultry stuffing, or as part of a tapenade.

Belgian endive is also known as French endive, witloof in the USA, chicory in the UK, as witlof (the Dutch name) in Australia, endive in France, and chicon in parts of Northern France and in Francophone parts of Belgium. It has a small head of cream-coloured, bitter leaves. It is grown completely underground or indoors in the absence of sunlight in order to prevent the leaves from turning green and opening up (etiolation). The plant has to be kept just below the soil surface as it grows, only showing the very tip of the leaves. It is often sold wrapped in blue paper to protect it from light and so preserve its pale colour and delicate flavour. The smooth, creamy white leaves may be served stuffed, baked, boiled, cut and cooked in a milk sauce, or simply cut raw. Slightly bitter, the whiter the leaf, the less bitter the taste. The harder inner part of the stem, at the bottom of the head, should be cut out before cooking to prevent bitterness. Belgium exports chicon/witloof to over 40 different countries. The technique for growing blanched endives was accidentally discovered in the 1850s in the Josaphat valley in Schaerbeek, Belgium. Endive is cultivated for culinary use by cutting the leaves from the growing plant, then keeping the living stem and root in a dark place. A new bud develops but without sunlight it is white and lacks the bitterness of the sun-exposed foliage. Today France is the largest producer of endives.

Chicory is at its best and in season during the following months: November, December, January, February & March.