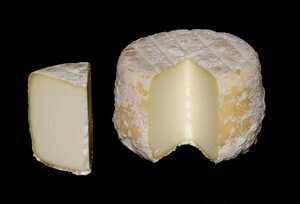 Crottin de Chavignol or Chavignol cheese is the most famous goat cheese of the many varieties produced in the Loire Valley. This cheese is the claim to fame for the village of Chavignol, France, which has only two hundred inhabitants.

The small cylindrical goat cheese from the area around Chavignol has been produced since the 16th century, but it wasn't until 1829 that it was first written about. The etymology is dubious: the word "Crot" described a small oil lamp made from burned clay, which resembles the mould used to prepare the cheese. Another explanation is that old "Crottin" gets harder and browner and tends to look like dung.

The flavour of Crottin de Chavignol is subtle and slightly nutty. In its youth, its dough is solid and compact, and its rind is white. As it ripens, the dough becomes crumbly and the mould on the rind matures into a bluish colour. The bluish colour doesn't mean that the cheese is no longer edible - quite the opposite.

A classic dish is baked Crottin de Chavignol on a green salad. The dish is said to go well with a Sancerre wine from its home region, or other wines produced from the Sauvignon Blanc grape.