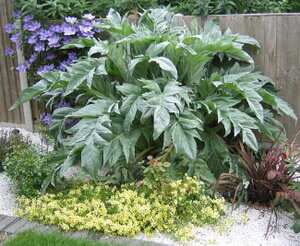 The cardoon from our garden; May

The cardoon is also called the artichoke thistle, cardone, cardoni, carduni or cardi, is a thistle-like plant which is member of the Daisy family, Compositae. It is a naturally occurring variant of the same species as the Globe artichoke, and has many cultivated varieties. It is native to the Mediterranean, where it was domesticated in ancient times.

The stalks, which look like large celery stalks, are delicious steamed or braised. They have an artichoke-like flavour. Cardoons are available in the market only in the winter months.

The main root can be boiled and served cold.

Cardoons are an ingredient in one of the national dishes of Spain, the Cocido Madrileno, a slow-cooking, one-pot, meat and vegetable dinner simmered in broth, cardoons are traditional in the cocidos of Madrid.

It's worth supporting the stems with a series of sturdy poles. We lost ours to strong winds this year and it was a plant that had been established for 10 years. I'm pretty confident that it will re-grow next year though as it has a simply massive root system.