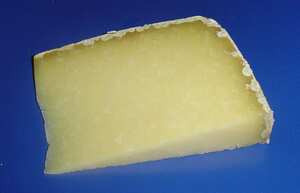 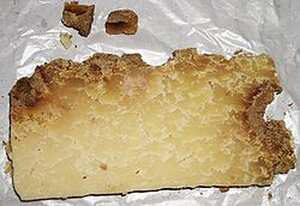 Cantal is a firm, AOC and AOP cheese from the Cantal département of France. It is named after the Cantal mountains in the Auvergne.

One of the oldest cheeses in France, Cantal dates back to the times of the Gauls. It came to prominence when Maréchal de Sennecterre served it at the table of Louis XIV of France.

There are two types of Cantal cheese. Cantal Fermier is a farmhouse cheese made of unpasteurised milk. Cantal Laitier is the commercial, mass produced version from pasteurised milk; both have to adhere to the same strict quality controls. Cantal is shaped like a cylinder, and is one foot in diameter. Cantal is made from unpasteurised or pasteurised cows' milk of the Salers breed. For Cantal, the milk of cows that are fed on hay (during 15 November to 15 April) is used.

This semi-hard cheese is aged for several months. The form is massive, and it has a soft interior. Its flavour, which is somewhat reminiscent of Cheddar, is a strong, tangy and buttery and it grows with age. A well ripened Cantal has a vigorous taste, while a young cheese has the sweetness of raw milk. Its aroma is of earth and pasture lands, and is reminiscent of the rich pasture land of the Auvergne. According to the time of ageing, three varieties are distinguished:

Most (>80% of production) Cantal is of the first two varieties. Cantal vieux is already a hard cheese, if kept properly, it can last up to a year and a half without spoiling. It is not produced in large quantities. Much loved in the Cantal region, Cantal vieux is quite rarely exported due to its strong taste, and can usually be found only in specialist stores.