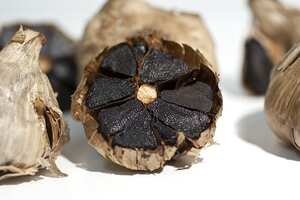 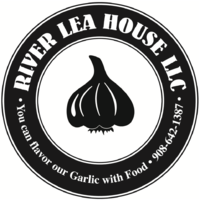 Black garlic grown in the USA

Black garlic is a type of fermented garlic used as a food ingredient in Asian cuisine. It is made by fermenting whole bulbs of garlic at a high temperature, a process that results in black cloves. The taste is sweet and syrupy with hints of balsamic vinegar or even tamarind. Black garlic's popularity has spread to the United States as it has become a sought-after ingredient used in high-end cuisine. It is unrelated to a genetically unique six-clove garlic also called black garlic and used in countries such as Korea, or with the ornamental plant Allium nigrum.

Black garlic was first introduced by a Japanese researcher in 2005. Although many have thought it has a long history in the cuisine of Korea and Thailand, it is a relatively new product and it was never used in Korean cuisine until recently. In Korea, black garlic was introduced as a health product and it is still perceived as a health supplementary food. It is prized as a food rich in antioxidants and added to energy drinks, and in Thailand is claimed to increase the consumer's longevity. One interesting use is in the making of black garlic chocolate.

In the United States black garlic entered the mainstream in 2008 when Le Sanctuaire in San Francisco began selling black garlic. In 2008, Black Garlic, Inc. made partnership with Katy Heath for black garlic distribution in Europe. Both companies formed Black Garlic Ltd. and now distributes black garlic in the U.K. and other European nations. The use of black garlic is growing in England, where it made its TV debut on the BBC’s Something for the Weekend cooking and lifestyle programme in February 2009. In July 2009, black garlic was introduced into Australia by Oliveria, a shop in Melbourne. It can now be found in selected markets across Australia.

In the UK, black garlic can be obtained online from South West Garlic Farm, Black Garlic Ltd and Ocado.

If you are in the USA try River Lea House LLC for home grown black garlic.