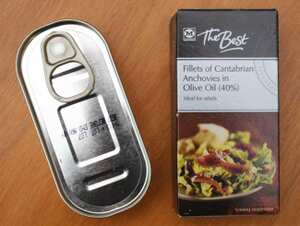 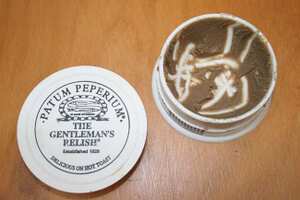 Anchovies are a type of small fish which are preserved by being gutted and salted in brine, matured, then packed in oil. They are an important food, both popular and infamous for their strong flavour.

In Roman times, they were the base for the fermented fish sauce called garum that was a staple of cuisine and an item of long-distance commerce produced in industrial quantities. Today, they are a key ingredient in Spaghetti alla Puttanesca, and are often used as a pizza topping. Because of their strong flavour, they are also an ingredient in several sauces, including Worcestershire sauce and many fish sauces, and in some versions of Café de Paris butter.

They are most commonly marketed in small tins, either as "flat" filets, or as "rolled anchovies" where each fillet is rolled around a caper. While both are quite salty, the flat fillets tend to be more so. They are also marketed in jars and tubes as a paste, mostly for use in making sauces, such as anchovy essence.

Anchovy essence is a thick, viscous, pink-coloured sauce made from ground anchovies and a mixture of spices. It is used to flavour soups, savoury sauces and dishes. It could be used as a poor substitute for Asian fish sauce, and vice versa.

Anchovy paste is manufactured from finely ground anchovy fillets. Salt and sometimes sugar is added to make a milder flavour.

Gentleman's Relish is a type of anchovy paste. It is also known as Patum Peperium.